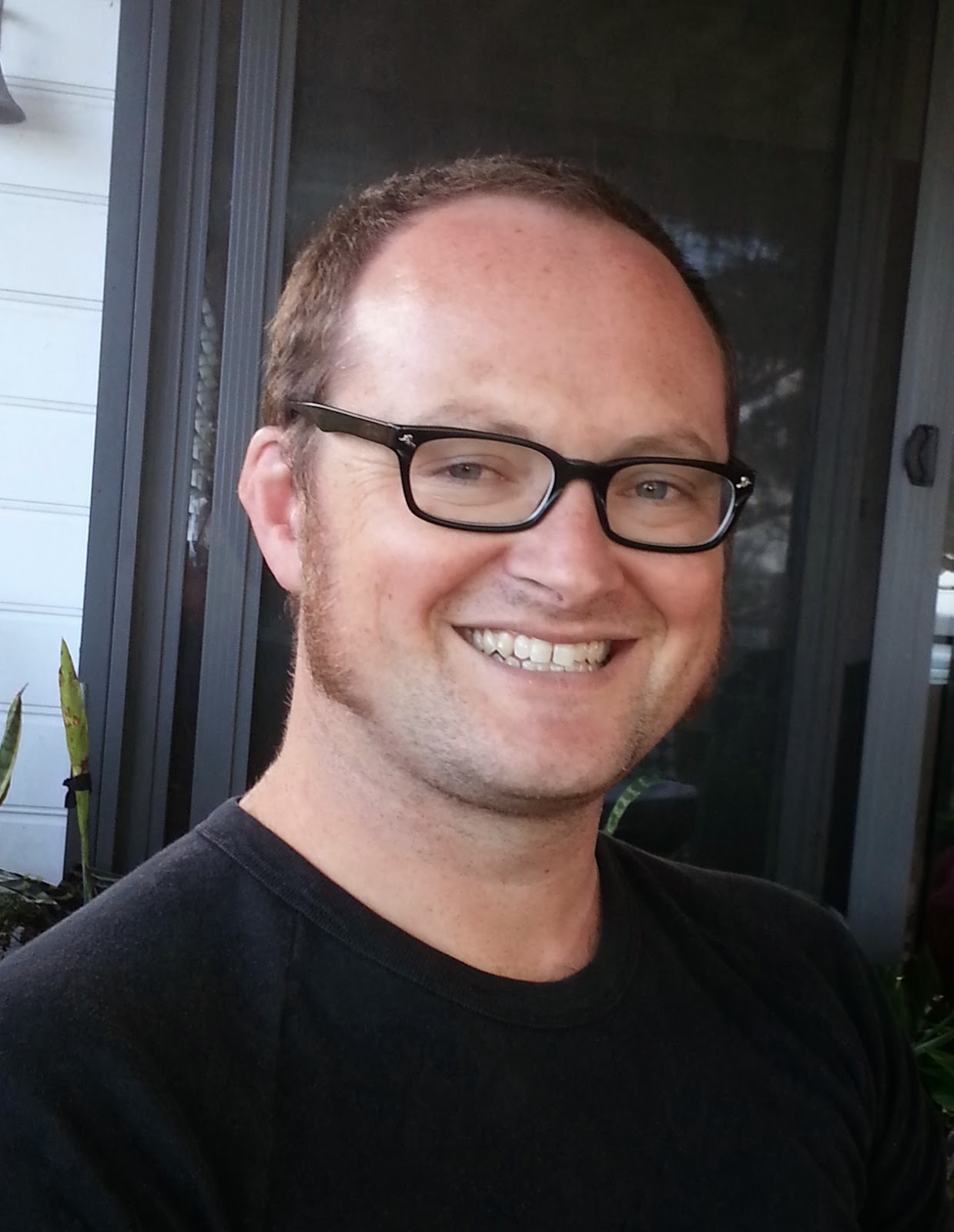 Sydney-based children's book illustrator and comics creator Andrew Cranna of The Bloodhound Boys fame, will be presenting a session on graphic novels at the upcoming Sydney Writers' Festival. He will also be battling it out in the live sketching stakes with his fellow illustrators. Here is the info you need to book:

Andrew Cranna: Creating Graphic Novels for Children
Graphic novels for the younger generation have exploded onto bookshelves and libraries across the world. Not only are they growing in popularity, they are also an absolute delight to create. Graphic novelist and primary school art teacher Andrew Cranna shows you how to create a graphic novel for kids.
Date: Wednesday 20 May 2015
Time: 1:30pm to 4:30pm
Cost / Ticketed: $90/$75
Website: http://www.swf.org.au/component/option,com_events/Itemid,124/agid,4647/task,view_detail/ 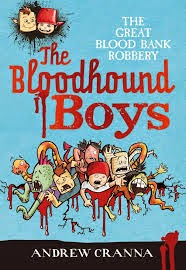 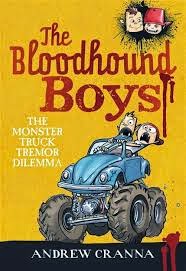 Family Day: Illustrator Battle Rounds
It’s big. It’s bad. It’s tough. And it’s back by popular demand. Yes, it’s the greatest drawing showdown this side of the harbour: Illustrator Battle Rounds! And there can be only one winner. Watch in awe as children’s illustrators race each other and the ticking clock in a live draw-off hosted by Oliver Phommavanh. Illustrators include carry-over champ Andrew Cranna, as well as Tony Flowers, Felicity Gardner, Serena Geddes, Gus Gordon, James Gulliver Hancock, Gregory Mackay and Matt Stanton.
Date: Sunday 24 May 2015
Time: 11:15am to 12:00pm
Cost: Free
Website: http://www.swf.org.au/component/option,com_events/Itemid,124/agid,4675/task,view_detail/

You can read all about Andrew on his website: http://andrewcranna.com
Posted by Black Mermaid Productions at 11:48 AM 1 comment:

Australian Comics Creators "Who Do You Think You Are?" Survey 2015 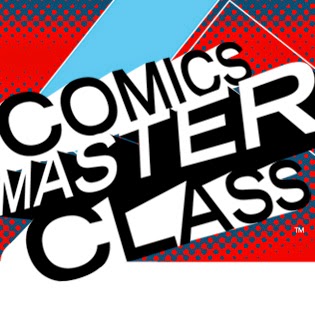 Comics Masterclass™ has just launched the Australian Comics Creators "Who Do You Think You Are?" Survey 2015.
The last time the Aussie comics community was surveyed was in 2009. That original survey, which was published by the Australian Society of Authors (ASA), was designed to collect data that would help the organisation develop rates for comics writers and artists.
Since that time the community has changed and consequently this second survey has been designed to find out what shifts have happened, what creators are doing, where and what they're publishing, what they need in the future to help them achieve their ambitions and goals, and more.
If you are an Australian comics creator, please participate and promote the survey as widely as you can so we can get a solid sample. The results will be published later in the year.


Here is the link: https://www.surveymonkey.com/s/australian-comics-creators-survey-2015
Posted by Black Mermaid Productions at 7:36 PM 1 comment: 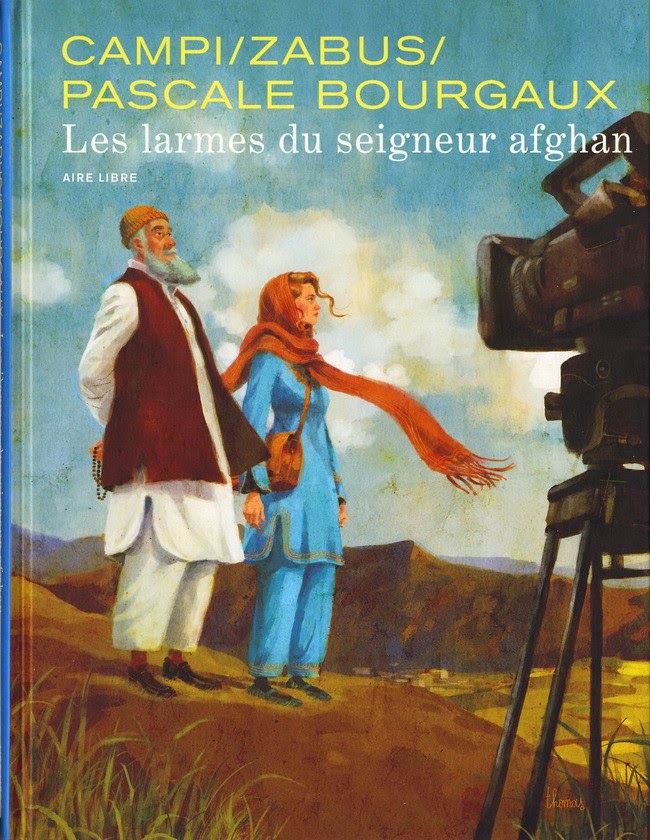 Comics Masterclass™ is delighted to launch its 2015 short courses program, starting with a workshop on "Breaking into European Comics: How to Find Professional Work on the Continent", which will be presented by award-winning Italian graphic novelist Thomas Campi who recently immigrated to Australia on a Distinguished Talent Visa supported by the Australian Society of Authors.

Thomas is the recipient of the Cognito Prize as Best Documentary Graphic Novel at the Belgium Book Fair, and also received the International Spectrum Fantastic Art 21 Gold Comic Award in 2014.

His two-hour workshop will be held in Sydney in February and in February and in Canberra in March 2015. It will cover subject matter such as markets in Frances, Belgium and Spain; “Bande Dessinée” (Franco Belgium drawn strips); storytelling techniques and more.

Comics Masterclass is planning an exciting lineup of other workshops during the year with coverage in other States and Territories, as well several online workshops to encourage Australia-wide participation and introduce innovative ideas and creative techniques to a growing community of comikers.

For more information on the "European Comics" workshop in Sydney go to:
http://comicsmasterclass.com/services/short-courses/breaking-into-european-comics-sydney/

For more information on the European Comics workshop in Canberra go to:
http://comicsmasterclass.com/services/short-courses/breaking-into-european-comics-canberra/
Posted by Black Mermaid Productions at 9:23 AM No comments: 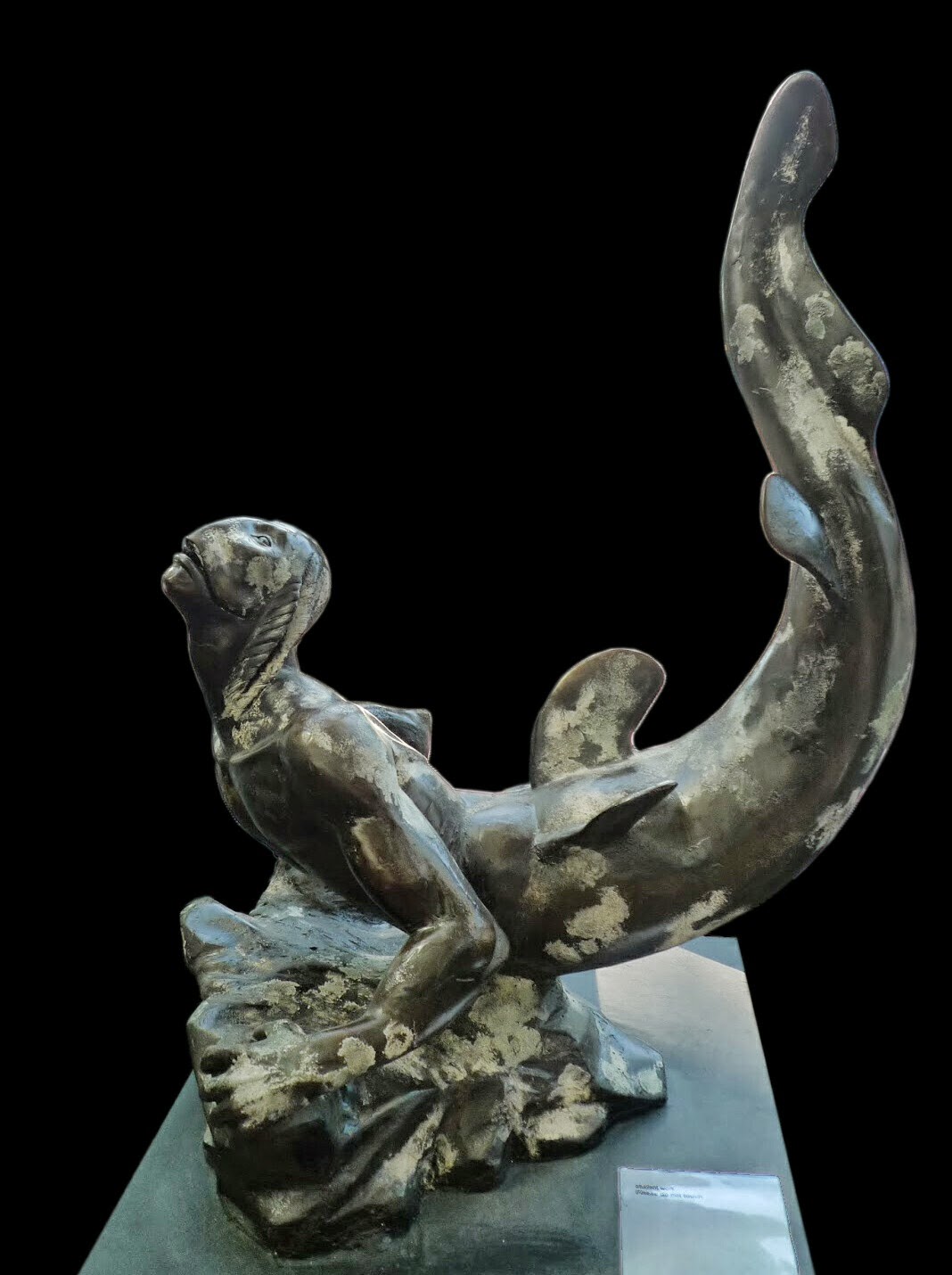 It's Julie here, and quite frankly I have to say the new year has got off to a great start. I'm sure the accompanying photos with this blog post will give you some indication why I am smiling.

A few weeks ago my friend Nick Nicolaou from Makeup Effects Group emailed me to let him know one of his interns – Hannah Crosby – was looking for a home for a sculpture she had created.

Turns out that Hannah had just finished a props course at the National Institute of Dramatic Art (NIDA). As part of her final year assignment, Hannah created a large statue of a mer creature. It had been standing in the NIDA foyer for some time but needed to move out to make way for new installations, and Hannah had no place to store it and would have been quite bereft if she had had to throw it out. Nick asked me if the statue could come home with me and I shouted a mighty "Yes!" without hesitation. 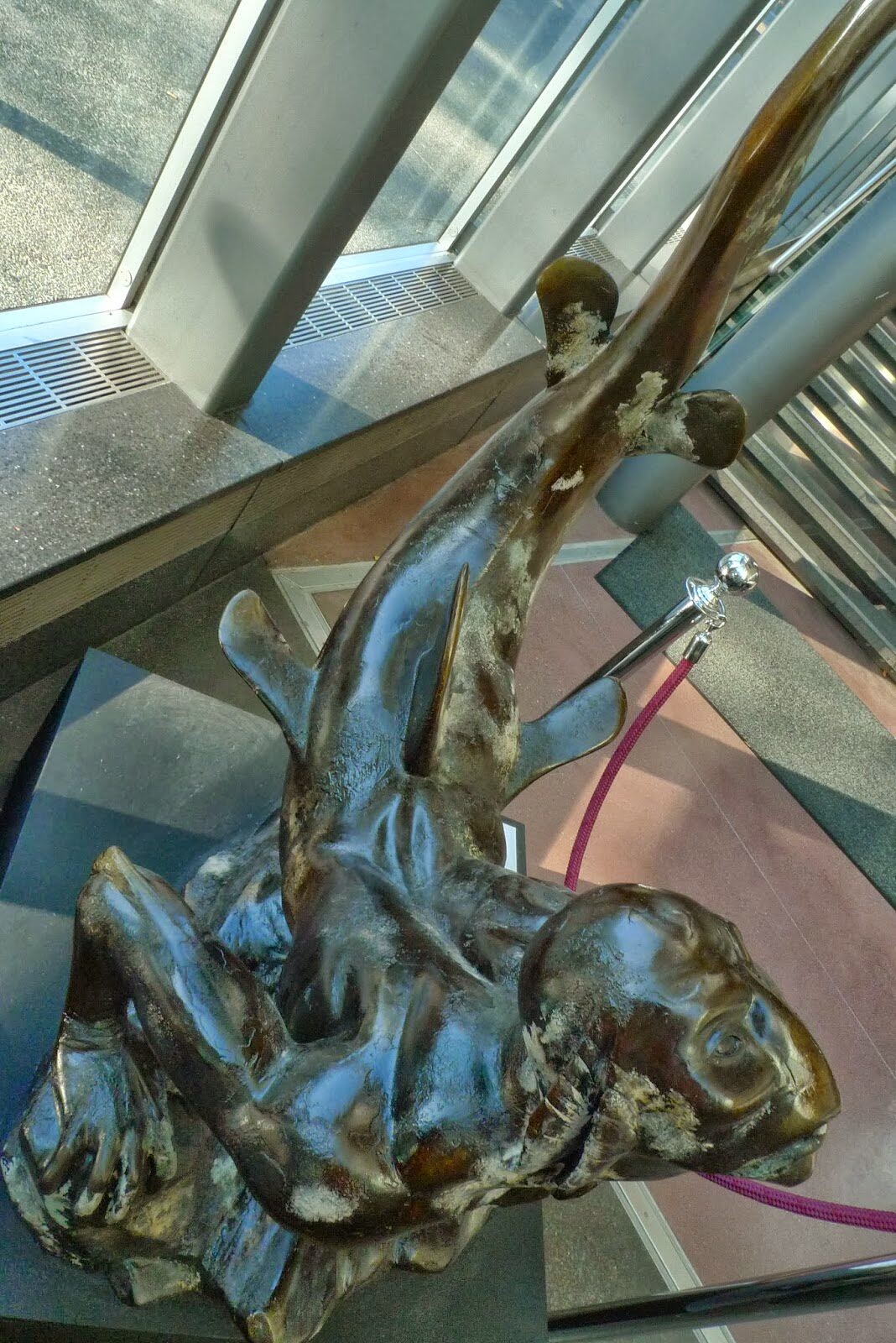 So a few days ago, my dad and I drove out to NIDA in a borrowed ute and met Hannah and her studio partner – Aussie comiker Matt Godden whom I have known for many years from a Sydney comics meet up (talk about another coincidence!). We spent some time chatting and easing the statue out of storage then loading it up and tying it off. Then home it came.

Just so you have a clearer vision of its dimensions and how it was constructed, it's made from polystyrene with a steel armature on the inside. The surface is coated with gyprock and finished to look like bronze. The statue is life-sized and about 1.8 metres tall and 1.5 metres square. It isn't that heavy but is attached to a wooden plinth painted black which is about 1 metre square.

Nick suggested that it would look great in the garden and he is right... However, I am hesitant in leaving it in the rain and we've had some heavy showers the last few days. Right now I am tossing up where to put it. The library would be perfect except for the fact it is occupied by cats at all times of the day and night, and I suspect they would use the sculpture as a climbing tree. I am also thinking about the outdoor patio area which is near a fountain. It is all undercover but we would really need to see how it fit in with the surroundings. It is temporarily being stored in one of our empty sheds so it is not exposed to the elements but we will figure it out soon. 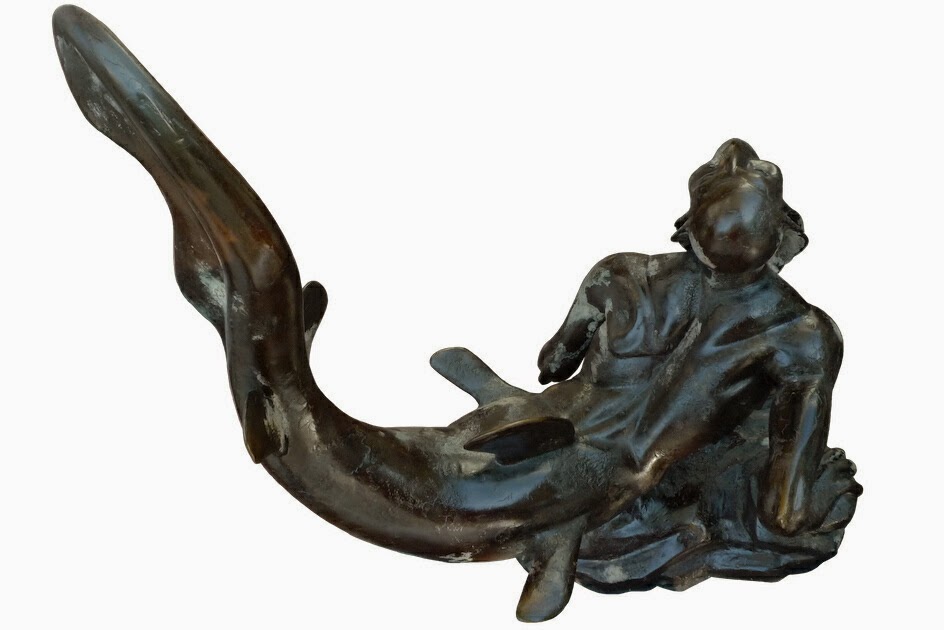 I also have some plans to showcase it to an appreciative mer audience down the track. One way or another it is going to be given pride of place.  I am thrilled with it, I get great pleasure looking at it, and I am very appreciative that Hannah has entrusted it to me. Thanks, Hannah (which by the way is a name shared by the world famous Hannah Fraser AKA "Hannah Mermaid"!).

For more information about Hannah Crosby and her business check out her website Crosby Art.

Posted by Black Mermaid Productions at 2:53 PM No comments:

Black Mermaid Productions presents its regular calendar for Aussie comikers to plan their annual comics convention circuit. The list also includes some international expos. Please note that at the time of publishing, some of these events have not been promoted on their respective websites with the relevant dates and venues. Also, some of these events have not set up their websites yet so there will be no link attached to it. This post will be updated as more information becomes available so please stop by regularly for additional information.

Please contact us on blackmermaid@blackmermaid.com if you want additional events to be added to this list.
Posted by Black Mermaid Productions at 12:30 AM 2 comments: 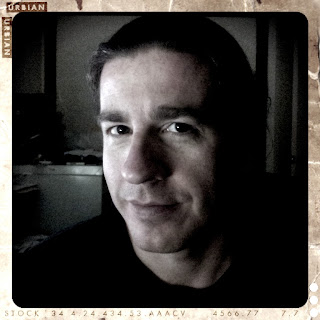 Multi-award winning illustrator and cartoonist and our old mate Jules Faber is running a children's writing and illustrating course in Bellingen, NSW, Australia in January 2015.

What do you need to know about the course?

Well, in working as a cartoonist and illustrator for over 20 years, Jules has figured out the right way to approach a children’s book from an illustrator / author’s perspective. Many people believe it is easy to write a children’s book but the complexity of children's publishing is deceptive. Some authors claim it’s actually more difficult than creating adult fiction

Jules will give you lots of tips and examine:


Utilising his personally formulated nine rules and guidelines, he will demonstrate how you can apply these to creating the right artwork to accompany your story from rough ideas through to finished art.


Participants will complete enjoyable small projects, and work towards creating an illustrated children’s story by the end of the week, thereby gaining an insight into the world of children’s writing and illustrating. 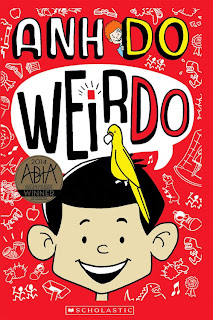 What do you need to know about Jules?

Jules has been working in book illustration for over 20 years, having completed work on many grown-up books and 10 children’s books for well-known authors like comedian Anh Do and cricketer David Warner. Jules is a multi-award-winning children’s book illustrator and cartoonist. He won the 2014 Book of the Year for Older Children at the Australian Book Industry Awards with Weirdo alongside author Anh Do, as well as the 2014 Best Designed Fiction Book for Children and the Best Cover at the Australian Book Design Awards with designer Nic Stofberg. His versatility as an artist means he has worked in a variety of different fields including live caricature, editorial cartooning, editing an award-winning comic book series and animating on a Disney program. From 2002-2004 he taught Comic Book Illustration and Scriptwriting and Storyboarding for TAFE Qld, and in 2005 he began a full-colour series of comics entitled Golgotha, which he re-imagined in 2014 in classic black and white. He has served three terms as the President of The Australian Cartoonists Association, the world’s oldest cartoonists organisation, and has won three Rotary Cartoon Awards, Australia’s biggest International cartooning competition.

Posted by Black Mermaid Productions at 6:15 PM No comments: 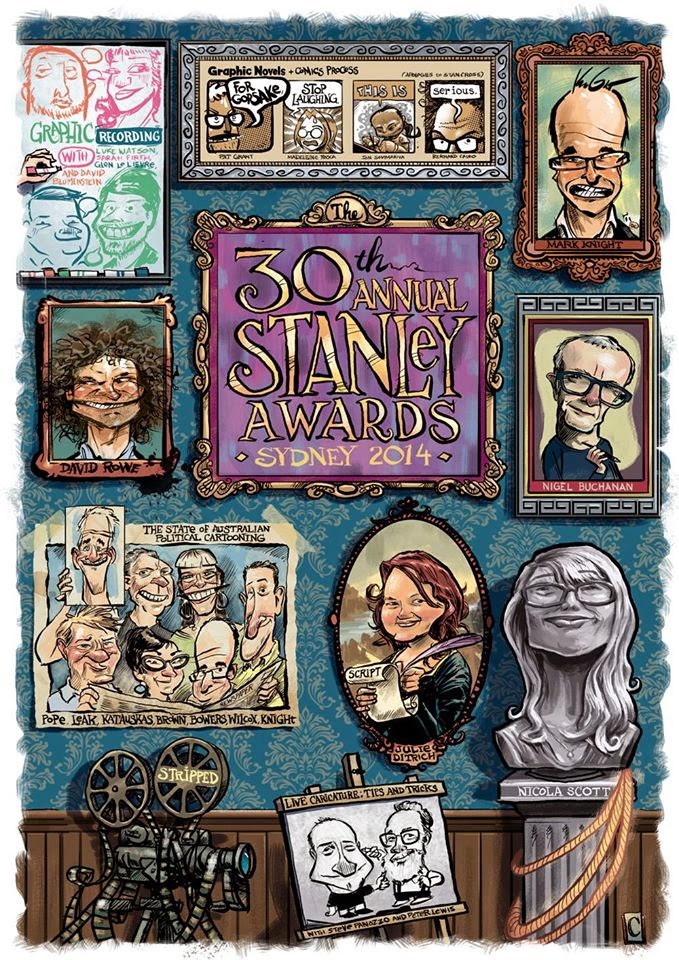 Black Mermaid Productions’ (BMP) partner and comic book writer Julie Ditrich will be presenting an information session on the new Comics Masterclass arm of BMP at the upcoming Australian Cartoonists’ Association (ACA) Stanley Awards and Conference in mid November. Julie will talk about this new professional development service that provides comics script and sequential art assessments, short courses and training for the next generation of Australian comics creators. Comics Masterclass team members Julie Regan will discuss the benefits of Creativity Coaching, and Lyndall Briggs will addresses creatives who are struggling with inner life issues such as anxiety and depression that may be hampering their success.
The event features an extraordinary line up of cartooning and comics talent including Nicola Scott, Pat Grant, Madeleine Rosca, Bernard Caleo, Steve Panozzo, Peter Lewis, Mark Knight, Nigel Buchanan, Jon Sommariva, David Rower, Sarah Catherine First, Warren Brown, Mike Bowers, David Pope and many others. 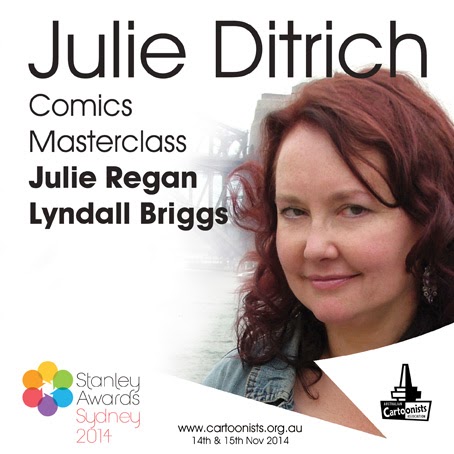 The Conference will be followed by the Stanley Awards on the Saturday night.
Here are the details:
Dates: Friday 14 and Saturday 15 November 2014
Venue: Menzies Hotel, 14 Carrington St, Sydney NSW 2000 Australia
Cost: $75 per day (members); $90 per day (non-members)
For more information and registration: https://cartoonists.org.au/stanleys-registration/
You can download the brochure here.
PS Julie is super excited and honoured to have had her first ever caricature, which was created by the amazing Christopher Downes. See if you can spot it in the poster at the top.

Posted by Black Mermaid Productions at 6:16 PM No comments: